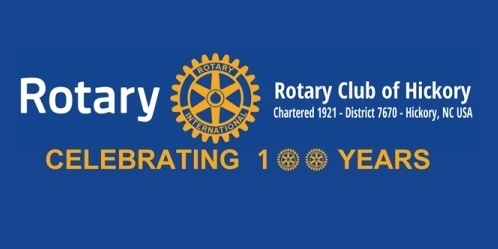 The Rotary Club of Hickory, North Carolina, the first service club organized in Catawba County, celebrates a century of service in 2021.

Although club plans to recognize and commemorate the centennial milestone differ significantly than what was originally envisioned prior to the pandemic, the Rotary club of Hickory will still host events and increase charitable giving to celebrate the club’s Century of Service to our local community and Rotary International.

On February 11th the club will host a Virtual Centennial Celebration at noon via Zoom. All Rotarians, including past and present members, as well as members, past and present of other clubs, and members of the community are invited to participate in this special event. At present tentative plans include recognition and remarks by Rotary International President Holger Knaack, a member of the Rotary Club of Herzogtum Lauenburg-Mölln, Germany. Also Stephanie A. Urchick, Rotary International Director 2019-21, of the Rotary Club of McMurray, PA USA and Rotary International Director 2020-2022, Peter R. Kyle, of the Rotary Club of Capitol Hill Washington, DC, USA will be in attendance. Anyone wishing to participate in this online meeting should contact club President Tara Bland at tbland@saltblockfoundation.org.

Rotary Club of Hickory Past Presidents will make a special presentation on the club’s history and Century of Service and Hickory  Mayor Hank Guess will present a special Proclamation to club President Tara Bland recognizing the club’s service and importance to the community over the last 100 years.

In recognition of the 100 year milestone, the Rotary Club of Hickory plans to increase charitable giving and volunteer efforts for the community above and beyond what has been done in years past. While the exact breakdown for 2021 is still going thru the budgeting and allocation process, the club plans to combine financial support and community service projects equivalent to $100,000 or more, symbolically recognizing the club’s centennial anniversary in a way that benefits the community club members call home.

CDC Covid guidelines permitting, the Rotary Club of Hickory plans to host a safe, in-person gathering as soon as such gatherings are permitted.

Chartered in 1921, during the first sixteen years of Rotary International, and ranked as the one of the largest clubs in its Rotary district, the Club has earned recognition from its Rotary peers and other community organizations for its spirit of service. Its contributions have also given direction to the advances of the city and county it serves. In contrast to its uncommon reputation and influence, however, its origin was ordinary: its birth emerged from the vision of a single individual.

The founder of the Rotary Club of Hickory was Watt Shuford (1873-1935), a member of one of Hickory’s pioneer families who pursued interests in dairying and farming. He managed the Hickory Seed Company for 20 years. In 1912, he helped organize the Catawba Creamery and, for many years as its president and manager, guided its growth into one of the largest cooperative creameries in the South. Shuford served on many local agricultural boards and was appointed by two state governors to terms on the State Board of Agriculture, serving for ten years.

While in Asheville for a 1920 creamery convention, Shuford attended a Rotary club meeting and became interested in forming a club in Hickory. Members of the Asheville club encouraged him to do so, helping with their guidance and assistance.

The charter for the Club, issued by Rotary International on March 1, 2021, was formally presented at a regular meeting on May 12 by District Governor Buck Perrin of Spartanburg, S.C. The Club was the 485th to be formed by the international organization. It was placed in the 280th district which, in addition to Western North Carolina, included the state of South Carolina and some clubs in Virginia and Tennessee. As districts changed over the years, the Rotary Club of Hickory is now a part of Rotary District 7670 which includes over 50 clubs in Western North Carolina.

At its first regular meeting, over a 1 p.m. lunch on Feb. 17, 1921 at Hotel Huffry, the Club voted to meet every Thursday at the same hour except on the last Thursday of each month when it would meet at 7:30 p.m. In 1926 the meeting site was shifted from the Huffry Hotel to the new Hotel Hickory, where the Club continued to gather for 44 years.

In its first December (1921) as an organization, the new Club demonstrated its service potential. It distributed 50 cents in new 5-cent pieces to each of the 23 residents in the County Home and gave 28 baskets–consisting of flour, chicken, nuts, fruit, candy, sugar and toys–to the needy. On the day following Christmas, it treated more than 1,000 children to a moving picture show in the City Auditorium. At its next regular meeting, the members took a collection of $34 to supply fuel and food to five families who were in “dire circumstance.”

The Club celebrated its 50th anniversary in 1970-71 by initiating the development of the 19-acre Rotary-Geitner Park, a waterfront park located at 2038 12th Street NW DR which is the future home of the Riverwalk and features an activity building, picnic shelter with tables and grills, gazebo, walking and nature trails, boat dock and ramp, a fishing pier, rest rooms and a system of mountain biking trails. The club also moved from its Hotel Hickory meeting place – first to Lenoir-Rhyne College, then to the Holiday Inn and finally to Mom & Pops Restaurant. Later, in 1993, the Thursday, noon, meeting place was moved to Lake Hickory Country Club.

In 1982, the Club joined hands with the City of Hickory to develop a second park – a 60-acre natural-area park near Lake Hickory at 2000 6th St NW. The development of the park, later named for Rotarian and City Councilman Glenn Hilton, included construction of picnic shelters, a children’s playground, and four trails. The project was recognized in 1984 as the best project in Western North Carolina’s Rotary District 7670.

In 1995, the Club-sponsored the Interact Club at Hickory High School, which had become one of the largest in the Rotary district, and was recognized as the most outstanding in the district. Interact is a Rotary-sponsored service club for young people. It gives high school students, an opportunity to participate in fun and meaningful service projects in their community.

As the world moved toward the new millennium, Rotary Club of Hickory continued to increase its fundraising goals and charitable giving initiatives. During the clubs 75th year (1996-1997), the club hosted the sixth Rotary Unlimited fundraiser, and began exploring alternate fundraising opportunities. As more and more of the club’s charitable giving focused on the theme of educating Catawba County students for a brighter future, discussion began about a new fundraiser. After extensive research and planning a new fundraiser, Education Alive, became a reality during the 1998-1999 Rotary year. Education Alive involved not only our Club but the entire community. Area businesses and individuals donated merchandise for auction and Catawba Valley Community College provided their basketball arena to host the event which was broadcast live by Catawba Valley Cable TV. During its second year, 1999-2000, Education Alive peaked, raising an astonishing $250,000 that year, followed up by $192,000 the following year. Education Alive, alternating occasionally with Rotary Unlimited, continued its successful run for a number of years and was finally phased out during the 2008-2009 Rotary year after raising almost a million dollars for student loans and other local educational initiatives.

During 2010 a new fundraiser, Rotarian Idol, was introduced to the community. Modeled after the successful Fox TV show, American Idol, Rotarian Idol is a singing contest for amateurs. Twenty contestants compete for First, Second, Third and Audience Favorite prize money. The annual event is held at P.E. Monroe Auditorium on the campus of Lenoir Rhyne University. Area businesses, as well as individuals, support the fundraiser by purchasing program ads, event tickets, and event sponsorships. Entering its eleventh year, in 2021, the event has raised over $577,572 to aid in funding the Club’s educational and charitable giving initiatives, as well as local and international humanitarian needs.

In addition to successful fundraising, the Club has had other recent notable achievements. During the 1999-2000 year the club chartered a Rotaract Club at Lenoir Rhyne University. “Rotaract clubs bring together people ages 18-30 to exchange ideas with leaders in the community, develop leadership and professional skills, and have fun through service”. During the 2000-2001 Rotary year, Rotary Club of Hickory chartered the new Hickory Sunrise Rotary Club which began meeting at 7:00 AM on the campus of Lenoir Rhyne University. Also the Club began supporting the Coins for Alzheimer’s Trust by placing CART buckets on the tables during club meetings. Members are encouraged to place money in the buckets to raise money for Alzheimer’s research.

The Rotary Club of Hickory made an initial financial contribution of $15,000 in April of 2011 and since then the Rotary Club of Hickory has donated an additional $212,000 to the Catawba County Partnership for Children for the Imagination Library program. The ongoing financial support of the Rotary Club of Hickory has allowed the Partnership to build the local Imagination Library program to serve over 5,300 Catawba County children each month. A recent evaluation of the program indicates that the Partnership and Rotary are making a considerable impact on early literacy in our community. 87% of parents report that they are reading more often to their children and that their children are becoming excited about reading. 99% of parents reported that they feel that reading to their child is helping them to be more prepared for success in kindergarten.

In 2014, the Rotary Club of Hickory Rotary Club of Hickory donated $14,000 to pay for the concept drawings for a new park, in downtown Hickory. The park was the brainchild of the Friends of Hickory organization, and Rotary Club of Hickory’s donation was the first step necessary for the project to proceed. The downtown park incorporates play space, an interactive educational water feature on the Catawba River basin, as well as a place to sit and enjoy the surroundings. The historic downtown area currently attracts a wide variety of businesses and visitors to Hickory. “The addition of a park adds to the appeal of shopping, dining, and doing business on Union Square, offering an active destination for our youngest visitors and their families”.

As the club begins celebrating a “Century of Service” in 2021, the Rotary Club of Hickory is successfully meeting the challenge to serve safely as the Covid virus continues to challenge humanity. Although the club is unable to meet weekly in person under current Covid restrictions, members continue to meet virtually on a weekly basis using Zoom, a leader in modern video communications, with a reliable cloud platform for video and audio conferencing. Despite these challenges the Rotary Club of Hickory still managed to distribute over $58,000 in 2019-2020 for educational and other charitable needs in the Hickory area.

Please Note: Photo above taken prior to Covid Pandemic

Over the last 100 years through two world wars, global pandemics and other social and financial challenges worldwide, the Rotary Club of Hickory’s initial membership of 18 has grown and contracted and now includes approximately 100 members. Its early focus on the local organization has broadened to embrace the district. Its benevolent concerns have shifted from the agrarian to the urban community and expanded beyond the city limits to attend to international needs. But, through time, changes and challenges, the Club has maintained its basic commitment to service. As Rotary looks to the future, it acknowledges that its continued effectiveness rests on its renewed dedication to the object of Rotary: “to encourage and foster the ideal of service as a basis of worthy enterprise” and to Rotary’s motto of “Service Above Self.” cat